After 40 years in broadcasting, Ralph is hanging up the headphones. 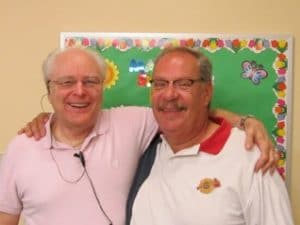 After 40 years in broadcasting, Ralph is hanging up the headphones. He exited WKHX and WYAY in 2009 where he was doing swing work while also doing voice work. In Atlanta, he has been the voice of Wild Wing Cafe for 24 years. Ralph is now enjoying his two grandkids, golf, baseball, and the beach. But, he’s not off the air completely; you can hear more of his work on www.radioworksgeorgia.com.

Ralph has always enjoyed all kinds of music. He studied music through his sophomore year in college, getting an Associate Degree in 1972. He played saxophone in a rock and roll band for 2 years, touring mainly in the southeast. Music actually led him to broadcasting. He will always love rock and roll, but has much respect for the passion of country artists which is different than the rockers. He said if he was stranded on an island with only one record to play, he would choose LITTLE FEAT and Bonnie Raitt is by far his favorite singer.

Before Ralph was a patient of ours, and while he was growing up, he had some extremely bad experiences with dentistry. He had developed a major phobia about dentists in general. After meeting Dr. Foster and the staff, he slowly began trusting us. Now, he says that “this ain’t your Mama’s dentist” while he listens to the great music playing in the office. Additionally he says that “Dr. Foster can’t retire because if he does, every 6 months I will be at his home door step to have my teeth checked.”