Terry was one of our first patients when we opened our office in East Cobb. 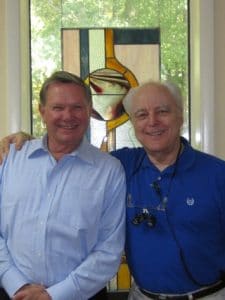 Terry was one of our first patients when we opened our office in East Cobb. His wife and children let us know that for sure we had made the right move from Smyrna.

Terry is an Aerospace Manufacture Representative that learned to fly when he was only 17 years old. At first, he was hired to pump gas for planes. Later he learned to fly and was offered a job with Delta, but because his wife was a flight attendant, he could not work for them. So, he flew corporate jets and charter planes all over the US and South America. Two of those charters were for Martin Luther King, Jr.

Georgia Tech and the Atlanta Falcons are lucky to have Terry as one of their fans. He plays golf with 15 of his friends once a year (in his words, he loves golf because he is a “glutton for punishment”.) His daughter managed a hotel in Costa Rica and Terry and his wife were there quite frequently. One of his favorite trips was cruising the British Virgin Islands on a 50 foot catamaran.

He enjoys his grandchildren and all types of music except Rap. One of his favorites is Andre Bochelli. He also enjoys reading and woodworking.

Thank you, Terry, for being the person you are and referring so many nice people our way.