Mom tells us that the Waldrop brothers can’t wait to come back for another fun check-up. 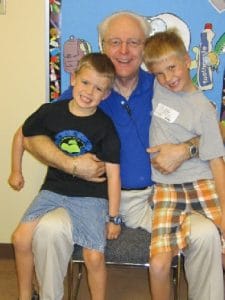 Mom tells us that the Waldrop brothers can’t wait to come back for another fun check-up. She even says, “Listen, you monkeys, this isn’t Monkey Joe’s!!” We are thrilled that they love to come to see us as much as we like to see them.

Cole, a 1st grader at Mountain View Elementary, just turned 7. After one session of Chess, he understood the game perfectly and was hooked.. He is in the Chess Club, Science Club, and is studying Martial Arts. He also has played basketball since he was 3. He LOVES Mac n’ Cheese, but ONLY the “box” kind. He loves playing with his dog Lucy.

Garrett, who is 5½ years old, also attends Mountain View Elementary as a Kindergartner. He also loves Science Club, Martial Arts, and of course, his brother. Garrett will be playing basketball for the first time this winter on his favorite person’s team–his brother’s. Oh, by the way, Garrett HATES Mac ‘n Cheese of ANY kind but LOVES his dog Lucy.

We never have to worry about toothbrush mix-ups, because Cole’s favorite color is green while Garrett’s is red.