Our patient of the month is a Veteran USAF Fireman who was stationed at Dobbins Air Force Base. 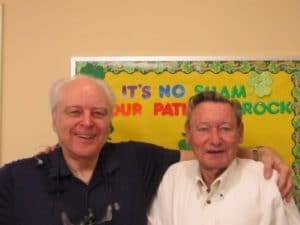 Our patient of the month is a Veteran USAF Fireman who was stationed at Dobbins Air Force Base. We enjoy having Richard as a patient because he is such an interesting person. He owns an AirStream RV that looks as new as the day he drove it off the lot because Richard puts a special wax on it. While he may not tow the Air Stream as often, it is still very useful. Richard lives alone and takes care of his own lawn. Since it may take a while, Richard relaxes in his Air Stream with a cold drink while he rests between cutting rows of grass. Sounds like it works out great!Richard is famous as a Brunswick Stew and Chili chef. He even caters some events.

When Sonny Perdue was governor, after tasting Richard’s stew at an event, Governor Purdue was so impressed that he and his wife both wrote letters saying how wonderful it was. They wondered when they were going to have more. Richard made a special trip to the Governor’s mansion to deliver his famous stew and was almost denied access by the security guard until Richard showed him the letter. Immediately, he was granted entry (of course the guard wanted some stew as well). We have been lucky enough to taste it and we have to agree-it is very good!