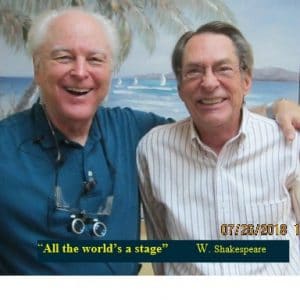 good friend and patient, Dave retired from the Coca-Cola, Corporate Quality Assurance in 2000 and moved to Woodstock that same year.

Having traveled across the U.S. A., England and Germany as well as France, Ireland, Mexico, and Brazil, Dave is well acquainted with the food and people in each country. He thinks that the food is excellent in Brazil (He is a meat and potatoes man), and the beef in Brazil is very tasty with France being a close second. In the food area. However, conversations with the people in Germany is exceptional.

Reading and playing golf are favorite hobbies for Dave as well as reloading the ammunition for his other hobby of target shooting. Reloading the ammo is a detailed process that relaxes Dave, He likes the money savings and the satisfaction of producing ammunition that performs better than those commercially bought.

When Dave was a sophomore at Virginia Tech, as a double major in Chemistry and German, he wrote a letter to the president of Lufthansa, gave him his background and asked the gentleman to help him secure a summer job in Germany. Much to Dave’s surprise, the president responded that he had found him not only a job but also arranged a room with a family who spoke no English. The Executive also arranged for transportation from Frankfort to the town where Dave worked for two months. He, of course, flew Lufthansa to Germany and back home. What a great experience!

Dave says about our office, ” The people and Dr. Bob’s attention to my needs over the years (1992 to present) has made me choose to travel 30 miles round trip to him and his team.”

Thanks, Dave! We are happy that you choose to see us because we love to see you!