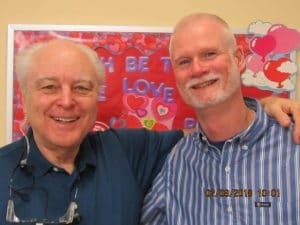 Jeff works at Johnson Controls as a project manager in charge of the installation of Security and Fire systems. Some of the interesting jobs, Jeff has done involves the security at hospitals that prevents the stealing of newborn babies by locking down the floor when protocol is not met.

Another interesting job Jeff had prior to working with Johnson Controls secured the floors of prisons. This allowed for lock downs when required. One time he even worked on a  Club Med hotel  in San Salvador where he got to drink hot KoolAid as he put a system in rooms that were prefabricated in the US and shipped to the island. Because the island is so small, he had to board a small plane to reach the site. They stayed in old army barracks that had no air conditioning and had to keep fires burning all the time to defend themselves from mosquitos.

Jeff is a busy person. Besides being married to Tabitha, he enjoys boating. Anyone who has talked to Tabitha knows she loves being on her boat. Jeff is famous too. Last year, he and his team won 2nd place in the intermediate league of the Corn Hole Tournament that is held annually in Woodstock. He loves hanging out with friends and family and is looking forward to having a grandson next month.

His daughter and son-in-law live in Denmark and he and Tabitha have been able to travel there and visit a few places with them. A word of caution. He says that in Greece, taxi drivers think that a red light and a speed limit are only mild suggestions. Of course, he and Tabitha will be traveling to Denmark to hold that baby boy as long as they are there. If he is spoiled because of it, they won’t have to deal with it because they will be on another continent.

Jeff knows there is no other football team but Alabama–ROLL TIDE! He likes to listen to classic rock, Florida Georgia Line, and his “woman” Miranda Lambert and Carrie Underwood. He likes Miranda because she is a “no nonsense” kind of woman.

Jeff favorite quote:  “When you’re dead you don’t know you are dead. It’s difficult for everyone else. It’s the same when you are stupid”

Congratulations, Jeff. We are so glad we got to meet you. You are a great guy!