Minion Bob is May Patient of the Month of 2018!

May Patient of the Month–Bob the Minion

We were fortunate this month to be visited by this guy. Seems he had a banana peel stuck bet 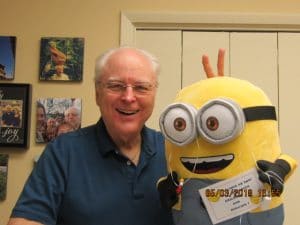 ween his first and second molar on the right side. When he flossed, (and, yes, he flosses at least once a day just like Stacey said), he couldn’t get it loose. He tried, and Kevin and Stuart, his fellow minions tried, and even Gru, the nice man he lives with tried, but they couldn’t get it out. Luckily enough Gru, the Villain turned Crime fighter, knew that Dr Bob welcomes all Minions, Children, and their Parents with or without banana peels. Dr. Bob actually loves all his patients.

So, Dr Bob worked on Bob (known as King Bob in London) and you can see how happy Dr. Bob made him. Just look at that grin! No more banana peel! Armed with a new toothbrush and a new spool of floss, he was on his way with his friends, Kevin, Stuart, and Gru to solve some more crimes.

Bob, Kevin and Stuart have starred in a few movies together. You have to remember Kevin, who broke out in a guitar riff of Van Halen in one of the movies. Although our friend Bob doesn’t have much screen time in the second film, you likely remember him from the end credits where Kevin, Stuart, and Bob auditioned for the new movie. His childlike antics were hilarious as he tried tirelessly to keep the audition screens open.

Minion Bob finds love in just about anything. He loves bedtime stories just about as much as he loves his little brown teddy bear with the yellow buttoned eyes. Thank you, Bob for loaning your bear to our mothers in our practice. He dreams of a world full of love and fun. That’s why we love him so much!

Congratulations Minion Bob!  Be sure to peel those bananas next time!