Although a tax accountant by profession, Gene loves tinkering around with cars, so, naturally he wanted to take his picture with Dr. Foster’ s Corvette. 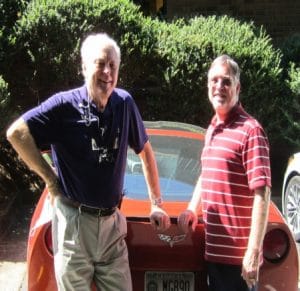 Although a tax accountant by profession, Gene loves tinkering around with cars, so, naturally he wanted to take his picture with Dr. Foster’ s Corvette. Also a lover of gardening, Gene has a spectacular yard and we are sure he works hard to maintain it.

Gene enjoys all types of music, but especially the blues and Eric Clapton. He tells us he also enjoys country’s Chris Stapleton. He has a lot of knowledge of all all the artists, including the fact that one of the lastest songs of Darius Rucker (formerly Hootie of “Hootie and the Blowfish),“Wagon Wheel” ,was written, but never performed, by Bob Dylan. A follower of the Georgia Bulldogs, Gene cheers for them. Also, he loves the Atlanta Braves and goes to their games in hopes that they come away with a win. Because his wife, Jayne is so outgoing and Gene, being the accountant he is, blends in with the crowd, Gene says that in the circle of Shakespeare’s Tavern (where his daughter, Becky, works and sometimes performs) as well as when he sees his daughter perform with her band “Denim Arcade”, people are mostly unaware of his name. Thus, he thinks his new Nickname should be “Mr. Cellophane”, a character that seems to go unnoticed, from the musical Chicago. We’re not sure that his family agrees with him.