As a regional manager of Yamato Corporation, he stays pretty busy. However, he still manages to have loads of fun. 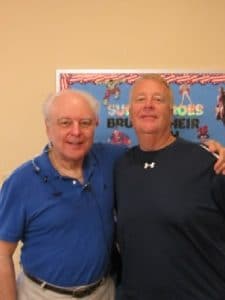 Jim has been a loyal patient with our office since 1985.

As a regional manager of Yamato Corporation, he stays pretty busy. However, he still manages to have loads of
fun. He loves the outdoors; kayaking, hiking, playing tennis, and supporting his kids. He loves the Falcons, but he especially enjoys watching his son, who plays long snapper position at GSU . Of course, Jim says, that everything goes better with a good glass of red wine.

Jim was a D-1 level high school football coach with several great players. For those of you who don’t know, these schools attract many good players, because they are known for their excellent athletic programs. They can only achieve that status by the State’s authorization . His most famous player was Ryan Seacrest. Jim says Ryan was actually a very good player.

Jim loves classic Rock n’ Roll, especially the Eagles, Jackson Browne, and Steely Dan, but his all time absolute favorite is Dan Fogelberg. He is A HUGE FAN.

And, we are a GREAT FAN of Jim. He always has a big smile on his face. We can tell he loves life and we enjoy his quips and jokes.